Growing up in an art dealing family (3 generations), I learned art terminology at a young age. "Fancy sounding" foreign French and Italian art terms were very common in family conversation... So common in fact, that they even wove themselves into conversations outside of art.

Below are a handful of my foreign favorite art terms. I have also included ways in which I--and you--can apply to life outside of art-oriented conversation. Ready to sound intelligent, possibly pretentious, but in good humor? Below is a quick guide to make you a slightly more cultured and classy individual.

1. Sprezzatura (noun) - Merriam Webster defines Sprezzatura as a “studied nonchalance.” The two zz's are pronounced like the zz in pizza. This Italian term can be applied to many things, including art, fashion, singing, and dance, and describes the conscious effort of making something look at ease. In fashion for example, intentionally wearing one’s hat off-center or having slight intentional wrinkles. The stylish model in the photo on the right exemplifies this casual, "I woke up like this" attitude...although he is a model, so of course it was all planned. In art, the legendary artist Raphael had a way of making his paintings seem effortless. The wheel thrown porcelain artist Jennifer McCurdy also has phenomenal sprezzatura in her fluid sculptures, like her Gilded Vortex Vessel shown below.

Gilded Vortex Vessel by Jennifer McCurdy. Despite its fluid and natural appearance, this sculpture took her months and the requires meticulous precision.

In singing, rapping, or dance, this is making things look so easy the spectator almost thinks "I could maybe do that." High talent takes on a mythical quality when done under the impression of effortlessness, and this is what the essence of sprezzatura represents.

2. Avant La Lettre (phrase; used as adjective) - This French phrase literally translates to “before the letter.” It is used to describe an action or concept before such thing was coined as a term. Simply put, it is “being *blank* before *blank* was labeled.” In art, a classic example is Picasso, who was the first painter of his revolutionary geometric style; critics only coined it “Cubism” after. His style at the time, prior to being constricted by societal definitions, was an example of Avant La Lettre. Some might also site Mark Rothko and color field paintings, or Stephen Sacklarian and his unique abstract biomorphic forms as examples of this.

Another example is an athlete or sports team who has a particular move or playing style the general public has not seen before. The athlete is not playing out of a specific school of thought, they are ahead of their time. These legends change the game, and labels soon come, but the athlete was Avant La Lettre. Example: Michael Jordan (above) dunking from the free throw line in the 1988 NBA Slam Dunk Contest.

Factory at Horta de Ebro by Pablo Picasso, 1909. A masterful display of his Cubism, before Cubism was even know, made a term, or taught formally in schools.

3. Trompe L’oeil (phrase; used as noun) - This French term gained a bit of notoriety after being the title of a Westworld episode--and aptly so. A Trompe L’oeil is a visual illusion in art designed to make a two dimensional painting appear three dimensional. Modern examples of this include the of virally shared street paintings that make ordinary sidewalks and streets appear like the edges of cliffs, the top of a building, etc.

This street art is a wonderful public display of a Trompe L'oeil.

Next time you see a 2 dimensional drawing appear totally 3-D, sure, you could simply say "neat optical illusion," or you could really impress (or annoy) your peers with the specific French art term designed for such an occasion..."Hmm, a master Trompe L'oeil I dare say!"

4. Murrine (noun) - An Italian word very specific to glass artand like many Italian words--incredibly fun to say (the e is pronounced like an "ay" on the end). Murrine is a style of glasswork in which an image or pattern is made and encapsulated throughout a long glass rod. When this rod is cut, the image is revealed in the the same way the fat and meat marbling is shown when slicing salami (sorry vegetarians). This glass “coins” all have a nearly identical image, and can placed side-by-side to pattern a piece. A wonderful example of murrine glasswork, and unarguably one of the best in the world right now, is David Patchen. Patchen’s pieces use murrine patterns of incredible complexity and numerous murrine rods. This unbelievably labor intensive process pays off in the gorgeous and intricate vessels he produces as a final work.

Murrine rods showing the pattern. These will be cut into numrous "coins" to be used in glass sculptures.

David Patchen Multicolored Foglio. This piece incorporates a multitude of various murrine in it's wildly intricate and complex pattern.

5. Oeuvre (noun) - A french term every art enthusiast should know, and in fact you probably do...even if you don’t realize it!. This is the same “oeuvre” in the common French phrase hors d’oeuvre--cocktail appetizers. Hors d’oeuvre--literally translates to outside (Hors) of the (d’) work (oeuvre). In the realm of culinary cuisine “work” refers to the standard, traditional courses of a meal (of which hors d’oeuvre is outside of). Oeuvre alone as an art term means the collective scope and body of an artist’s work--simply put, all of the works an artist has produced over his or her career.

This term is also a fancy way to refer to the body of work of an author, composer, or musician. Imagine dropping this term when talking about music!

The face your friend makes when you drop "oeuvre" casually in conversation.

I hope you enjoyed reading this post as much as I enjoyed writing it...now get out there and start dropping some art lingo!

For art advising services, visit us at CapitalArtAdvisory.com 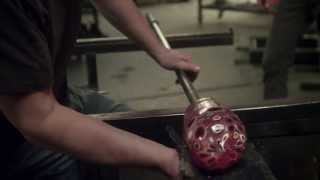 In Memory of Marvin Lipofsky

3 Amazing Glass Art Galleries and Museums in the U.S.

No tags yet.
bottom of page